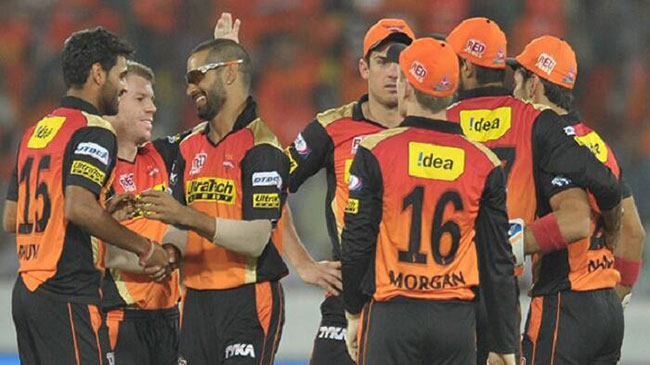 Chasing a huge target, RCB needed their dynamic trio – Gayle, Kohli and AB de Villiers – to click in unison but it was only partially fulfilled in the end. Gayle was in his elements as he smacked eight sixes and four boundaries for his 76, off 38 balls, and put on 114 runs for the opening wicket with his skipper Kohli in 10.3 overs.

Kohli too contributed 54, but the failure of de Villiers and wickets at regular intervals in the latter stage leave them short.

For Hyderabad, David Warner scored his ninth fifty of the season and Ben Cutting produced a match-winning all-round show to guide them to a famous win. Cutting, after contributing an unbeaten 39 off 15 with the bat, took two crucial wickets of Gayle and KL Rahul in the second innings.

Early in the chase, Gayle smashed five sixes and three fours in no time to score his fifty off just 25 balls as he took RCB to 59/0 after powerplay overs. Along with Kohli, Gayle powered RCB to 100-run mark in nine overs to set a good platform, before Cutting got the prized wicket of the West Indian in the 11th over.

Kohli was not deterred by Gayle wicket and hit Cutting for a four in the very next ball to lead the chase. Kohli then hit another four and a six in the next two overs to reach his fifty off 32 balls. But he didn’t last long as three balls later Barinder Sarn clean bowled Kohli to give SRH a big boost.

But one over later, Bipul Sharma sent back De Villiers cheaply for five to further reduce RCB to 148/3. RCB then lost four more wickets as their chase was hampered by Bhuvneshwar Kumar (0/25) and Mustafizur Rahman (1/37), who produced another brilliant death-over spells.

Earlier, Warner continued his terrific form to help Hyderabad post a massive 208/7, highest ever in IPL final . Warner also became the second batsman, after Kohli, in the IPL history to score 800 or more runs in one season. Warner contributed 69 off 38 balls, which included three sixes and eight boundaries, and took his IPL 9 tally to 848. But Kohli failed to breach 1000-run mark to finish at 973.

SRH skipper justified his own decision to bat first, by giving his team a fiery start along with his opening partner Shikhar Dhawan. They took SRH to 59 for no loss after the powerplay overs, but the introduction of Yuzvendra Chahal in the seventh ended the 63-run stand. Dhawan was caught by Chris Jordan at deep square leg after scoring 28 off 25 balls with the help of a six and three fours.

Warner kept the scoreboard ticking and raced to his fifty off 24 balls in the ninth over. After the fall of Moises Henriques (4) in the tenth, Warner took SRH over the 100-run mark in the 11th with Yuvraj Singh at the other end.

Warner added a useful 28 runs in 3.4 overs with Yuvraj, before he was caught by Iqbal Abdulla at short third man off Jordan in the 14th. Two wickets in two balls, of Deepak Hooda and Yuvraj, late in the innings slowed down the SRH for a while as they reached 156/5 in 17 overs from 97/2 after ten.

Yuvraj chipped-in with a handy 38 off 23 balls, hitting two sixes and four boundaries, and Cutting’s late onslaughts took the total over 200. He smacked four sixes and three fours to help SRH score 52 runs off the final three overs.