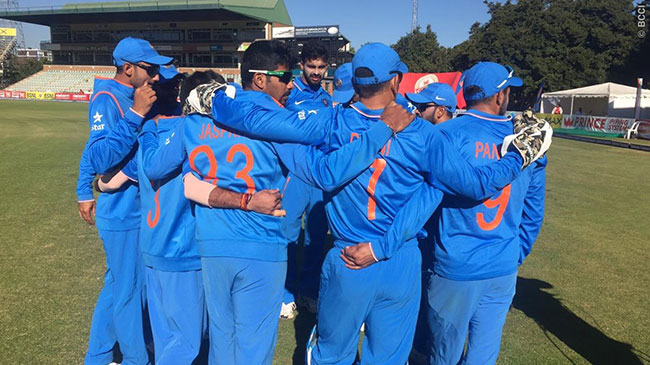 Zimbabwe consumed 32 overs in establishing a foundation, only for it to come tumbling down when they lost four wickets in four balls.India didn’t lose those many over the series, which they took 3-0 as MS Dhoni equalled Allan Border’s record of 107 wins to become the second most-successful ODI captain behind Ricky Ponting.

The gulf in skill between the two sides was extremely stark. While one struggled to find a batsman who could produce a substantial innings, the other had rookies contributing heavily.

KL Rahul, the first Indian ever to score a hundred on debut, made an unbeaten 63 on Wednesday. The 30-year old Faiz Fazal, the oldest Indian ODI debutant in 16 years, celebrated the occasion by hitting 55 off 61 balls and sealing the victory with an imperious pull for four.

There were 169 balls and 10 wickets remaining when India breezed past a target of 124. The three wickets they did give up to secure the whitewash was the fewest any team had lost in a three-match series.

Zimbabwe had won the toss and opted to bat on a pitch that was hard, true and excellent for strokeplay. Yet their top order bored the home crowd by playing 81 dots in the first 102 balls before the first drinks break. And it seemed like that was the plan.

They wanted to save wickets, only to lose four in four balls. They hoped to make up for the dilly-dallying in the later overs, only to be bowled out with 7.4 overs to spare. Forget India, even irony was thumping Zimbabwe.

Jasprit Bumrah lit the fuse for the hosts’ latest implosion. He hit the deck and hustled the Zimbabwe batsmen for pace. Zimbabwe were 102 for 3 when he began the 33rd over, then 104 for 7 in the 34th, and 19 runs later, all out. Bumrah finished with 4 for 22, his second four-for in three ODIs.

Timycen Maruma, playing his first ODI in nearly two years, was the first to go in the collapse. He was too slow bringing his bat down and Bumrah had his off stump cartwheeling.

Next, the 22-year old fast bowler showed he could get the ball to straighten too and had Elton Chigumbura caught behind for his second successive golden duck. It was MS Dhoni’s 350th dismissal in ODIs. That wicket ended the 33rd over.

Off the first ball of the next one, Malcolm Waller dabbed Axar Patel into the covers and set off for what should have been a straightforward single. Except Richmond Mutumbami didn’t see it that way and sold his partner down the river. Captain Graeme Cremer was handed a golden duck as well when he played back to the left-arm spinner’s arm ball.

Until those few minutes, the match was going along at a sleepy pace. Chamu Chibhabha and Vusi Sibanda refused to take even the slightest risk. The eighth over ended with a glorious, on-the-up cover drive. The ninth began with an off drive that screamed intent. But besides that the two batsmen did precious little to push the Indian bowlers. The next boundary did not come until the 25th over, after that partnership of 36 runs in 88 balls had been broken.

Perhaps Zimbabwe were dissuaded from strokeplay by what had happened to Hamilton Masakadza. His wild slash in the sixth over settled in the hands of Rahul at first slip.

Sibanda could have been caught for a duck in the next one had Yuzvendra Chahal not grassed a skier at midwicket. Worried by the amount of chances India were creating, Zimbabwe simply shut down in the first half of their innings.

But that played into India’s hands. Axar was finishing an over in almost 60 seconds and Chahal was bowling with great deal of control and guile. He mixed his pace and his length – but never his line, that stayed firmly on middle and off.

He tossed the ball up, but the revs he put on it ensured it would always dip before batsman’s front foot could reach it. Sibanda was worked over in this manner – sucked forward and, because of the drift inward, tempted into playing with the closed face. The leading edge was taken and Chahal completed the catch.

Bumrah took care of the last specialist batsman Mutumbami with another ball that straightened off the seam in the 35th over. The tailenders Donald Tiripano, Neville Madziva and Tawanda Mupariwa couldn’t mount a fight either and were back on the field for the second innings before the lunch break.