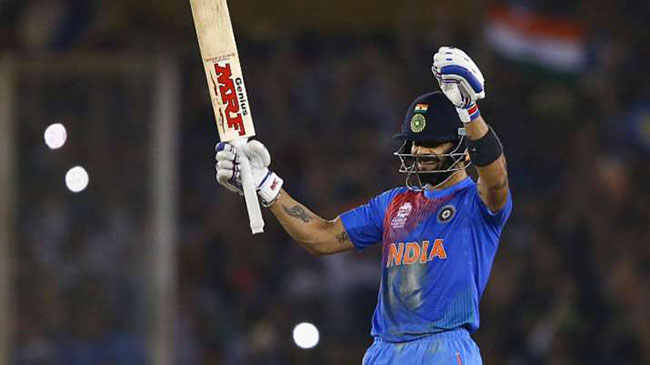 The equation was getting tight. India had their master of chase, Virat Kohli out there. Giving him company was MS Dhoni. But at the other end was a spirited Australian side that wasn’t going to give up. They had done well to start positively before falling behind in their innings. Now was the chance to make things even.

James Faulkner ran in to bowl the 18th over with India still needing 39. Kohli launched him for 14 off his first three deliveries – two fours and a six. Chants of India Jeetega grew louder as the equation came down to 22 off 12. Nathan Coulter-Nile, Australia’s best bowler of the night was handed the ball. This was going to be the over.

Kohli missed the first one, but he connected the next three for boundaries. Victory was within reach and four were required off the last over. Dhoni waited, and launched a four to secure India’s sixth consecutive win over Australia and a well-deserved place in the semi-final of the World T20. Kohli went down on his knees, took a breath and soaked it all in. It was clearly his best T20 knock.

Australia made the right call to bat. The rate at which their openers scored; it seemed as if India were in for a long day. But one wicket is all it took India to pull things back, and as the rest of the batsmen couldn’t quite get going the way one had intended, a total that would have potentially touched 200, was limited to 160.

Australia tried, but couldn’t quite get the acceleration needed at the end. India had given away 51 in the first four overs, but admirably tightened things in the end afterwards.

Rohit Sharma and Shikhar Dhawan had the tedious task of giving India a start they could rely on, and most importantly set the base for the rest of the batsmen. Tedious; because they hadn’t been able to do it yet.

Dhawan started well with a spanking four through covers and a smoked six over, but an ambitious pull found Usman Khawaja inside the circle. Two overs later, it was Rohit’s turn as he walked down the pitch and missed a cutter from Shane Watson. Once again, the openers hadn’t quite delivered.

Dhoni had backed Suresh Raina to be his best bet to bat at No. 4 despite his repeated failures batting there. This was the ideal situation for the left-hander, but all he could manage was 10 that included a streaky boundary, before edging a short ball from James Faulkner to Peter Nevill. Australia’s move of replacing Coulter-Nile with Faulkner and not Adam Zampa proved brilliant. The third wicket was down with India just having gone past 50.

Meanwhile at the other end, Kohli had helped himself to two spectacular boundaries off Hazlewood – a lovely flick towards the deep square-leg boundary and a cover drive fine of the deep third-man fielder. Yuvraj, who joined him at Raina’s wicket, started off with boundary edged towards third man.

He twisted his toe with a glance and despite looking in an insurmountable amount of pain, carried on. Zampa came on and straightaway generated excitement with a close stumping call of Yuvraj which the batsman survived. With the asking-rate touching ten, Kohli launched Maxwell for a six, and Yuvraj did the same to Zampa next over.

Australia relied back to pace and Faulkner gave away five singles before foxing Yuvraj with a slower one that was taken splendidly by Watson at covers. This had to be the over for either sides and Faulkner had delivered. With Dhoni, Kohli ran, and ran hard. Hazlewood gave away a 14-run over, 10 of which were ran by both batsmen.

India struggled to get the big runs, and it wasn’t until that one over from Faulkner that changed things. Dhoni and Kohli had brought up their 50-run stand off just 26 balls, and it was easy picking from there. India had scored 59 in their last 4.1 overs.

Earlier, Australia raced away to 31 off the first three. Jasprit Bumrah’s attempt to bowl short on a wicket that seemed to have no pace saw him go for 17 off his first over – Khawaja getting three boundaries. Ashish Nehra, who had bowled a testing first over, beating the batsmen five out of six times, went for 10 in his second.

Bumrah’s expensive over got Dhoni to bring his best bowler R Ashwin, but once he conceded two sixes from Finch and a wide that went for four, things appeared bleak. It was a risk to give Nehra a third over, but Dhoni’s move hit the bull’s eye. Outside off, full, Khawaja goes after it, edges and is taken by Dhoni.

With the wicket, the ball started finding the fielders. After three tight overs, India tasted another success with Ashwin getting David Warner out stumped for his 50th T20I wicket. India had already applied the squeeze when Dhoni pulled off an ace, handing Yuvraj Singh the ball. First ball of the tournament, and Yuvraj had the dangerous Steven Smith inside edge to Dhoni, who left the field in disbelief.

Despite three quick wickets, Australia’s run rate remained almost eight. Finch, who started explosively, was restricted to taking singles. Even Glenn Maxwell, going at less than run-a-ball, couldn’t find the boundary – his drill over Yuvraj’s head was dealt with extreme athleticism from Raina who chucked the ball back inside the boundary.

Finch finally got a boundary after long, but then in an attempt to wade Hardik Pandya, found Shikhar Dhawan at long-on. Australia were 53/0 in four overs. They managed 51/4 in the next 10. With India darting through their overs, Maxwell decided to go top gear with a four and reverse sweep for six off Jadeja.

But just then, Dhoni gave Bumrah his third over. Maxwell swung, and off went the stump lights. Nehra bowled a sublime 18th over which completely outfoxed James Faulkner and Shane Watson. Bumrah too followed with a perfect over, mostly sticking to fuller length and the yorker, but a 15-run over from Pandya gave Australia one final push.