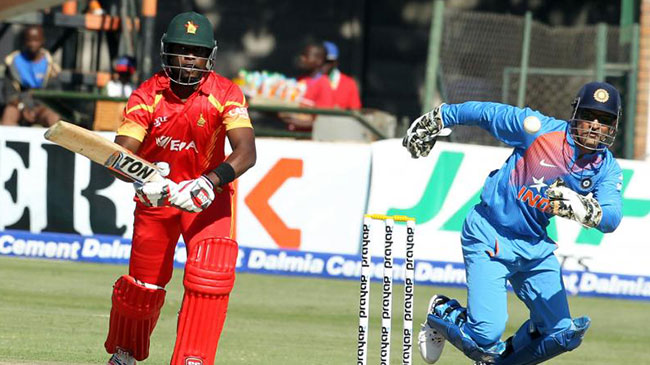 “Kuch mat karna [Don’t do anything],” screamed MS Dhoni. Zimbabwe were 57 for 5 at the time and they were gifting their wickets away.

Left-arm fast bowler Barinder Sran picked up three in a single over and recorded the second-best figures by a debutant in T20I cricket. His 4 for 10 sprung the trap on Zimbabwe, Jasprit Bumrah’s 3 for 11 made sure they couldn’t even think about escape and India levelled the series 1-1 with their first 10-wicket victory in T20 cricket.

If a team is kept to 99 for 9, it is common to think that conditions had been bowler-friendly. But a 1 pm start in Harare with not a cloud in sight reduced the chances of swing. The pitch was being used for a third time on the tour, which gave the team batting first a slight advantage.

Zimbabwe gained that advantage when the coin fell in their favour. If they had put up a big enough total, the natural wear and tear of the surface could have made the chase that much more difficult.

Instead, Zimbabwe were 35 for 4 after the Powerplay on the same deck they had made 170 on only two days ago.

India gave the new ball to two debutants for a second time in as many matches and Sran made sure to extract as much as he could from it. Only one delivery in his first spell of three overs was pitched short.

His first wicket was excellently constructed. Zimbabwe could not find a single run off the bat in nine balls. Chamu Chibhabha came on strike. He had found eight of his 10 runs through boundaries. Sran sensed that the batsman would go for a release shot and bowled his offcutter. T

he batsman mistimed his swipe over mid-on and Ambati Rayudu snapped up an excellent catch over his shoulder while running towards the boundary.

Hamilton Masakadza got his first run off his seventh ball with a fearsome drive through the covers and moved into double figures with a thump down the ground. To the next ball he faced – an inswinger, pitching on a good length – he heaved across the line and lost his middle stump. Sran welcomed the new batsman Sikandar Raza with a wide slip and he obliged by steering his second ball to that fielder. Tinotenda Mutumbodzi fell for a golden duck, though replays indicated he was incorrectly adjudged lbw by umpire Russell Tiffin. The batsman was struck above the knee roll and Hawk-Eye suggested enough of the ball had pitched outside leg stump.

Nevertheless, Sran had three wickets in an over and Zimbabwe were on course for a terribly underwhelming performance. Not even one of their batsmen could reach a strike-rate of 100 – only the fourth time that has happened in T20I history.

Peter Moor, brought in for the injured Richmond Mutumbami, top-scored with 31 off 32 balls. His presence would have given Zimbabwe hope but Dhoni played a mean trick. Knowing the opposition was in recovery mode – in other words fearful of losing any more wickets – he called on his spinners to rush through the middle overs.

Yuzvendra Chahal deceived an advancing Malcolm Waller in the flight, and refused Elton Chigumbura the leverage he so desperately wanted.

With the score at 73 for 5 after 14 overs, panic set in on Zimbabwe. India preyed on that by bringing back their premier fast bowler. Bumrah. Moor never saw the slower delivery coming and was caught at point, Chigumbura’s stumps were bulldozed a few minutes later, and with all their specialist batsmen dismissed, the best Zimbabwe could do was play out the 20 overs. Bumrah, now, has 24 wickets in 2016 – the most by any bowler this year.

The chase was straightforward. Mandeep Singh cruised to his maiden T20I fifty, but he could have been caught in the fifth over if Malcolm Waller, rushing forward from deep square leg, and Taurai Muzarabani, running back from short fine leg, had communicated better. In the end the ball fell between them and trickled for four.

The India opener offered another chance on 22 when he pulled straight to Donald Tiripano, the fielder on the square leg boundary, who parried over the rope for six. It was just that kind of day for Zimbabwe. They struggled with the basics from start to very early finish.