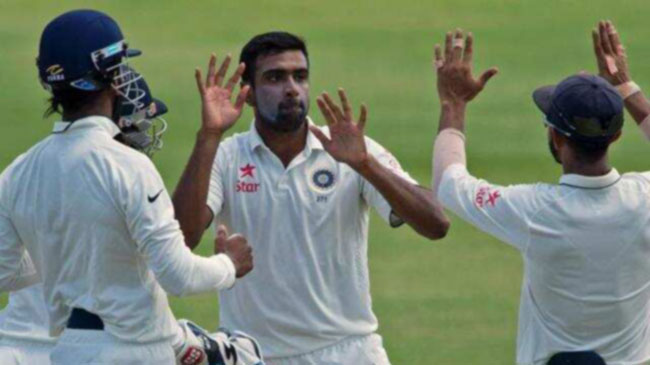 It took more than four sessions coming, but once R Ashwin found his rhythm he ran through the West Indian line-up to seal India’s first innings win in the Caribbean, and their biggest one outside Asia.

After lunch on day four, with India needing eight wickets to finish the match, Ashwin found dip and drift. Simultaneously, he cut out on the loose balls to earn a five-for and a hundred in the same Test for a second time, the most by an Indian. West Indies couldn’t offer much resistance and folded in 78 overs, they only bettered that tally by 12.2 in the first innings.

Before Ashwin struck, Marlon Samuels and Rajendra Chandrika had managed to hold India up for 22 overs, which did frustrate India a little. Especially after an umpiring decision got India’s goat.

Coach Anil Kumble, watching from the balcony, lifted his finger after the first replay. However, the replays – understandably not enough in terms of angles or quality for financial reasons – didn’t return a verdict beyond reasonable doubt nor was there a soft signal made by the on-field umpires.

So the benefit of that doubt went to Samuels. His bat obscured the front-on replay somewhat, and there was nothing else to go by. The third umpire erred on the side of caution.

Virat Kohli wasn’t amused. He was seen having an animated conversation with Ian Gould, who had irritated the Indian captain on day two too. Kohli was trying to get in an extra over before stumps, but Gould conversing on a walkie-talkie had denied them.

In a glimpse of what makes him a frustrating batsman to watch in Tests – a superb stroke maker but an average under 35 – Samuels drove and cut gorgeously to take 23 off the 19 balls after his reprieve. Rain arrived, 40 minutes before lunch, and several players walked straight to a laptop and sat around it, perhaps watching the replays and wondering how Samuels had survived.

India lost 15 minutes because of the rain. When an early lunch was taken, Ashwin had only bowled 22 overs in the match. He had offered too many balls to cut and was the only wicketless Indian bowler at the time. On a pitch that didn’t assist spin, and against batsmen who were happy to sit back, he was made to work hard.

Ashwin’s rhythm, however, returned immediately after the break. He beat Samuels in flight, with the ball dipping and hitting him on the pad. The next ball didn’t turn as much, and took a soft outside edge for two runs. That was followed by another probing over, replete with a leading edge. You could sense Ashwin was building up to something.

He had Chandrika believing he was driving at a half-volley, but the dip created distance, and Saha juggled a low catch off the batsman’s pad. Replays weren’t conclusive vis-à-vis the inside edge, but Chandrika didn’t protest at all. Next up was Jermaine Blackwood, for a pair. Once again, Ashwin created the distance with drift and dip, and the offbreak was driven to short midwicket.

Samuels became the victim of drift. As it is, he likes staying beside the line, but this one from Ashwin drifted away, and then didn’t turn as much as he expected, hitting the top of off stump. The ball kept dipping on the inexperienced batsmen, who were arguably facing this quality of spin bowling for the first time, and debutant Roston Chase soon fell to forward short leg because his intended block didn’t reach the pitch of the ball.

Amit Mishra broke the Ashwin streak with a topspinner that trapped Shane Dowrich, but Ashwin finished his first five-for outside Asia with another beauty. Jason Holder thought he could drive at a seemingly full offbreak, but the ball drifted away to create the bat-pad gap, and turned through it to hit the leg stump. Ashwin had taken five wickets in 51 balls.

A win seemed only a matter of time but India got fancy with bowling changes, and Carlos Brathwaite and Devendra Bishoo made them wait for 24.1 overs for their ninth wicket. Forced to take the tea break, Ashwin came back to end the match with the wickets of Bishoo and Shannon Gabriel in one over.