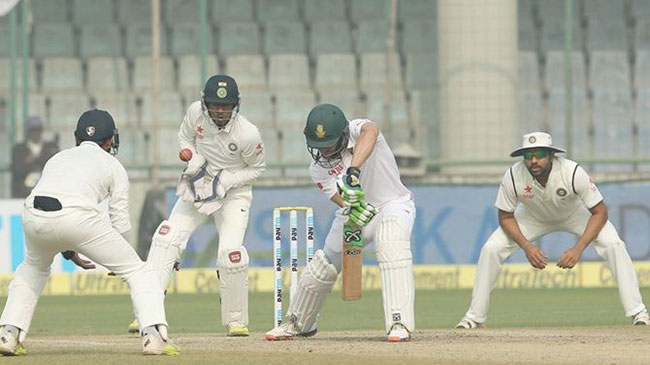 The scorecard will say South Africa were bowled out for 143, another low score in series where they only passed 200 once in seven attempts.

It will say India won by 337 runs to complete a 3-0 series win. But for anyone who didn’t witness the Delhi Test, it will take a closer reading to appreciate the extent of South Africa’s fourth-innings defiance and India’s struggle to bowl them out. Between them, India’s four specialist bowlers sent down 136.1 overs, bowled 87 maidens against a set of batsmen who had made up their minds to block everything.

In the end, South Africa simply had too much to do. AB de Villiers played out 297 balls, Hashim Amla 244, and Temba Bavuma and Faf du Plessis ate up a fair share of deliveries in a concerted effort of stonewalling. But to do so for more than five sessions was simply too much of an ask on a slow Feroz Shah Kotla surface that began deteriorating halfway through the final day.

Having lost only five wickets in 138 overs until tea on day five, South Africa lost their last five wickets in the space of 27 balls. Umesh Yadav, bowling fast and reversing the ball appreciably, bowled Dane Vilas and Kyle Abbott, and had Dane Piedt caught behind by Wriddhiman Saha diving in front of first slip.

But the big wicket was that of de Villiers, who had been at the crease since early in the final session of day four. Having defended resolutely and taken a series of painful blows on the glove, he wasn’t able to keep out an R Ashwin offbreak that spat at him from a good length. The ball popped off that much-battered glove and settled in leg slip’s hands.

It was only fitting that Ashwin, the best bowler on either side right through the series, ended the match with another five-for, bowling Morne Morkel as he shouldered arms to a ball that drifted into him through the air and spun less than expected. He ended the series with 31 wickets and his fifth Man-of-the-Series award.

Till his dismissal, de Villiers had been a picture of calm at the crease, his footwork precise but not extravagant, moving him into compact positions from where he watched the ball closely and defended at the last possible moment.

He was not getting as close to the pitch of the ball as Amla had consistently done, and there were more edges as a result. However, his hands were impeccably soft, and the ball died a painless death a short distance from the bat and well away from the close-in fielders.

If anything, his approach possibly made the pitch look better to bat on than it actually was. A number of deliveries misbehaved in one way or another over the course of the day, but De Villiers minimised their danger by playing almost impossibly late, and refusing entirely to go hard at the ball.

The one bowler who consistently worried him was Umesh Yadav. In two overs close to the lunch break, he got the ball to rear at de Villiers three times. Twice he knocked his bat out of his hands, smacking his top glove once and his bottom glove on the other occasion.

When he came back into the attack late in the second session, he hit his glove with another lifter, either side of balls that jagged in, kept low, and struck him on the unprotected part of the knee.

India had a 72-over-old ball at the start of the day, and the first eight overs were shared among the two seamers – who tried, with little success, to unsettle Amla and de Villiers from around the wicket – the occasional leg-rollers of Virat Kohli, and the never-before-seen legbreaks of Cheteshwar Pujara. India were waiting to bring their spinners on when the second new ball was available. With the pitch slowing down considerably, they were banking on getting some life out of it with a harder ball with a prominent seam.

Jadeja produced the wicket-taking ball in his third over, drawing Amla forward with flight, and getting the ball to drift into him and spin away sharply. For once, Amla’s front-foot stride was short and insufficient to get close to the pitch of the ball, which beat his outside edge and clipped the outside of his off stump.

An air of expectation hung around the middle during the course of Jadeja’s next few overs, with the allrounder producing a loud lbw shout by beating du Plessis with a slider and then producing an edge that fell just short of slip.

Eventually, du Plessis settled down, proving himself a worthy recipient of South Africa’s blocking baton. Amla had taken 46 balls to get off the mark, and de Villiers 33. Du Plessis bested both of them, taking 53 balls to get his first run, a pushed single into the covers off an Ashwin full toss.

By then, Ashwin had tried everything – a fuller length to try and exploit footmarks outside the off stump, only to be stymied by the South Africans’ refusal to drive, legbreaks and carrom balls, and a switch to around the wicket.

At the other end, Jadeja produced an unceasingly metronomic performance. He kept wheeling in, kept attacking the stumps, and the batsmen kept defending stubbornly. His figures at the start of the day were 23-16-10-0. At lunch, they were 35-28-10-1.

Having last conceded a run in his 19th over, bowled during the final session of day four, Jadeja threatened Bapu Nadkarni’s 51-year-old record of 21 successive maidens until he sent down a short ball in his 37th; it sat up off the pitch, so slow it almost demanded that du Plessis punch it through the vacant mid-on region.

By that time, though, the pitch was beginning to show increasing signs of wear. Turn and bounce from Ashwin produced an appeal for a slip catch off de Villiers in the 117th over, but the ball had lobbed off pad, not bat. In his next over, Ashwin spun one from wide outside off and across the stumps; de Villiers’ pad was in the way but the ball was clearly missing the stumps.

Jadeja then ripped one past du Plessis’ outside edge. Perhaps this prompted his front pad to move a little further across in defence than normal, when Jadeja produced a delivery of similar line and length later in the over. It slid on with the arm, though, and struck that pad low, right in front of the stumps. For the second time in the day, Jadeja had been the irresistible force to dislodge an immovable South African.

JP Duminy was the new man in. For the first time since the fourth over of South Africa’s innings, when he had dismissed Dean Elgar, Ashwin bowled at a left-hander. There was a tangible edginess to Duminy’s footwork while he faced Ashwin; he moved a fair distance sideways, but barely an inch forward or back.

He shuffled all the way across his stumps twice in a row to balls bowled from around the wicket. The first slid on with the angle, past leg stump. The second one straightened just enough to hit Duminy’s front pad as he looked to play around it. All of the Feroz Shah Kotla appealed, and Bruce Oxenford slowly raised his finger.

He was struck in line with the stumps, but it was a tight call on whether it straightened enough to hit the stumps; it would have probably hit some part of leg stump.