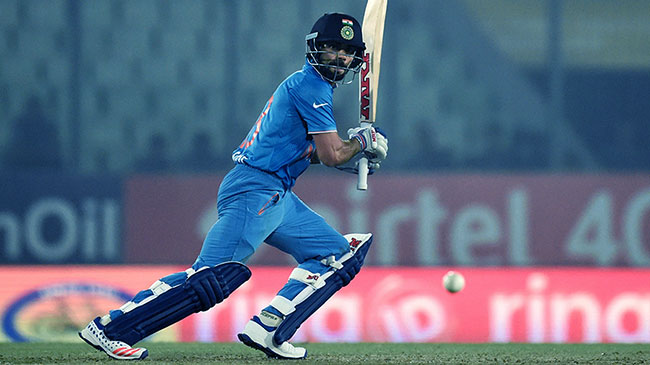 Pakistan captain Shahid Afridi had predicted that their Asia Cup T20 clash against India will be a contest between his bowlers and their batsmen. Come Saturday, his prophecy came true but with an unpleasant twist.

His bowlers showed up but the batsmen didn’t as they delivered an abject performance, leaving little room for Mohammad Amir and Co to defend a paltry 83. India, thanks to a composed knock from Virat Kohli (49), reached the target in 15.3 overs with five wickets remaining.

It was the bowler’s match to be fair. Not a pitch from which you would expect fours and sixes raining. Kohli was the odd one out, head and shoulders above the rest on a track that saw the best struggling. After bundling out Pakistan for their third lowest T20I total, India were greeted by the pace and swing of Amir and quickly reduced to 8/3 in 2.4 overs.

The left-arm paceman set the game alive with an excellent first over. His first delivery, an inswinging yorker, trapped opener Rohit Sharma plumb. Umpire was unmoved. Pakistan dumbfounded. Next ball swung in again, hitting Rohit flush on the pads and this time the umpire raised his finger.

In walked Virat Kohli, a thick outside edge and he was out of the firing line with a single. On strike came Ajinkya Rahane, drafted in the side in place of injured Shikhar Dhawan. A wide down the legside was followed by another inswinger and Rahane was on his way back to the dugout after being given lbw. Amir removed Suresh Raina in his next, leaving the Indian dug out in a tizzy.

Kohli was then joined in by Yuvraj Singh who scored a boundary off his second delivery – the first of India innings coming in the fourth over of the chase. Kohli saw off Amir’s remaining two overs and in fact, hit two successive fours off his last one to calm the nerves. Amir finished with figures of 3/18 in four overs.

Together, the pair added 68 runs for the fourth wicket before Kohli was wrongly adjudged lbw for 49, as the umpire failed to spot the inside edge, off Mohammad Sami. Kohli would count this among one of his best and mature T20 innings as it came in trying conditions. Yuvraj played his part, staying unbeaten on 14.

Before Kohli, it was the pacers who set the game for India. Hardik Pandya produced his best bowling performance in T20Is, returning with figures of 3/8 while Ravindra Jadeja chipped in with 2/11 to take the life out of Pakistan batting. Ashish Nehra and Jasprit Bumrah also picked a wicket each.

MS Dhoni’s decision to bowl first paid rich dividends as the opening pair of Mohammad Hafeez and Sharjeel Khan lasted four deliveries with Nehra removing the former as he went for a non-existent cut to be out caught-behind for 4. The ball was short of length, had the bounce but the width was missing.

Bumrah then bowled a testing second over to debutant Khurram Manzoor for a maiden. Dhoni’s ploy of keeping a wide slip worked when Sharjeel went after a wide Bumrah delivery to be caught there by Ajinkya Rahane for 7 in the fourth over. By the end of the Powerplay overs, Pakistan had lost three wickets, to be placed at a precarious 32/3.

Precarious turned into a full blown crisis when allrounder Pandya’s introduction in the sixth over resulted in the biggest blow to Pakistan’s hopes. He induced an edge off the bat of Shoaib Malik (4) that was taken by Dhoni, leaving Pakistan at 35/4.

Yuvraj Singh then removed Umar Akmal (3) and skipper Shahid Afridi (2) ran himself out while going for a second run when an alert Jadeja let loose a lightning throw from the deep catching him well short of the crease. Pakistan were gasping for breath and in the danger of being bowled out for their lowest T20I total.

Somehow, they scraped past the 50-run mark in the 11th over but then Jadeja got into the act, trapping Wahab Riaz (4) and then cramping Sarfraz Khan for space, cleaning him up for 25 – the highest of the Pakistan innings. Sami and Amir stayed long enough to take the score beyond 74 runs – Pakistan’s lowest T20I total before Pandya returned to shut the doors on the innings, removing both tail-enders off successive deliveries.