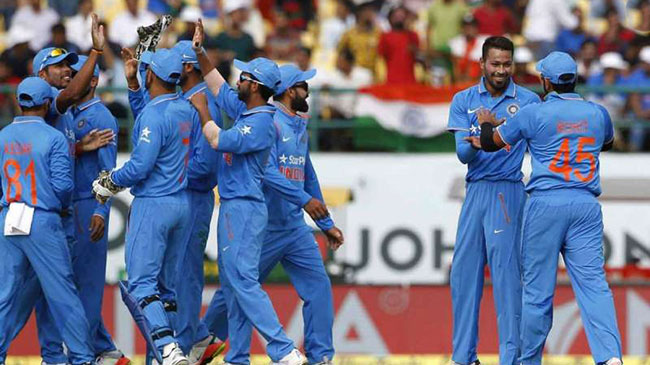 Sharing the new ball in conditions that initially encouraged seam and swing, Hardik Pandya and Umesh Yadav ran through New Zealand’s top order to set India up for a six-wicket win in the first ODI in Dharamsala.

From 65 for 7, New Zealand recovered to post a relatively respectable total thanks to Tom Latham, who became the tenth batsman to carry his bat through an ODI innings, and Tim Southee, who struck a 45-ball 55 at No. 10, but a target of 191 was never really going to test India.

Ajinkya Rahane and Rohit Sharma got India off to a solid start with a 49-run opening stand, and Virat Kohli took over thereafter, as he does so often in chases big and small, and his unbeaten 81-ball 85, full of trademark cover drives – the straight-bat punched variety as well as the wristy flat-bat swishes – guided India home with 101 balls remaining.

He brought up the winning runs with a cleanly struck six off Ish Sodhi, skipping out of his crease and clattering the sightscreen behind the bowler.

Sent in to bat, New Zealand would have been disappointed to get bowled out with 37 balls still remaining in their innings. There was swing early on, a bit of seam movement, and a tendency for the ball to stop on the batsmen occasionally, but nothing so devilish in the conditions to cause their top order to collapse so rapidly.

Opting to bowl first, India sprang a bit of a surprise by handing Hardik Pandya the new ball ahead of Jasprit Bumrah, but the allrounder soon showed why MS Dhoni may have taken this decision.

Fifteen minutes before the toss, Pandya had received his ODI cap from Kapil Dev. He may also have absorbed some lessons about new-ball bowling from the great man: where he has bowled predominantly short in his 16 T20Is so far, Pandya here pitched the ball up and swung it away from the right-handers, while consistently hitting the high 130s.

Having produced two edges and a play-and-miss from Martin Guptill in his first over, Pandya broke through with one that straightened towards off stump, forcing the batsman to play from the crease and nick to second slip.

Then, Umesh Yadav removed New Zealand’s two most accomplished batsmen. Kane Williamson slashed the last ball of his third over to third man; then, off the first ball of his fourth over, Ross Taylor, late to withdraw his bat from the line of the ball, edged a perfectly-pitched outswinger to the keeper.

India frustrated Corey Anderson by bowling into his body and denying him room to free his arms, and he made 4 off 13 before seeing a rare glimpse of width and flat-batting Pandya uppishly to the right of mid-off, where Umesh completed a stunning diving catch. The same combination of bowler and fielder then sent back Luke Ronchi, who flicked in the air to mid-on.

When Kedar Jadhav, given the ball for the first time in his ODI career, sent back James Neesham and Mitchell Santner with successive deliveries in the 19th over, New Zealand’s innings seemed unlikely to last beyond the 30th over.

Watching all this from the non-striker’s end, Latham may have felt slightly puzzled, because he had looked utterly at ease at the crease, playing close to his body, and driving crisply through the covers and down the ground. He needed someone to stay with him. Doug Bracewell did that for 45 balls before flicking Amit Mishra to short midwicket, helping New Zealand past 100, before Southee arrived at the crease.

He could have been out for 2, but Umesh let him off by dropping a straightforward chance at fine leg after he had skied a pull off Bumrah. Southee thanked Umesh and hit two fours in the same over, off the unfortunate Bumrah, punching him on the up through the covers and pulling him through midwicket.

He then skipped down the pitch to Mishra and lofted him inside-out over the covers before launching the first six of his innings, off Axar Patel, over long-off. Before this match, Southee had hit a six every 24 balls, roughly, in his international career. This one came off his 25th ball, evidence of the restraint he had shown initially.

He hit two more sixes on his way to his maiden ODI half-century before skying Mishra to cover in the 42nd over. By then, he had scored 55 out of a partnership of 71 for the ninth wicket.

With only No. 11 left for company, Latham went after Mishra, chipping him inside-out for four and slog-sweeping him for six off successive balls, but the innings wasn’t to last too much longer. Almost as soon as he had Ish Sodhi in his sights, Mishra trapped him on the crease with one that hurried on straight, legspinner foxing legspinner.