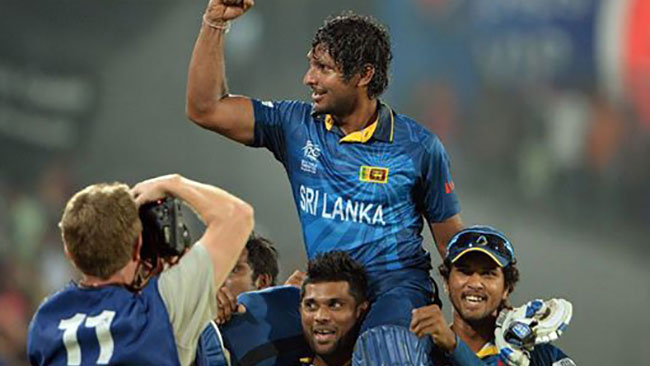 Sri Lanka ended an eighteen-year wait for ICC silverware as they beat India by six wickets in an engrossing climactic match of the World T20 on Sunday. This was the islanders first World T20 win and it came after four lost ICC finals: World Cups (2007, 2011), and WT20s (2009, 2012).

Fittingly, the force that guided the victors past the winning line was veteran Kumar Sangakkara, who along with Mahela Jayawardene, had announced this to be his last Twenty20 International game. Sangakkara shepherded Sri Lanka’s chase of the 131-run target with an astute 35-ball 52.

It was his 54-run partnership in just above five overs with Thisara Perera that swung the balance Lanka’s way, after India had striven gallantly to defend a small total. Perera finished it with a massive six off Ashwin, with 13 balls to spare.

Sri Lanka’s bowlers had earlier restricted India’s dangerous batting unit to a decidedly below-par score. Only Virat Kohli stood up with a brilliant 58-ball 77 against a barrage of confining bowling.

The spinners Sachithra Senanayake and Rangana Herath turned their eight overs for just 45, while pacers Lasith Malinga and Nuwan Kulasekara were miserly in the ‘death’ overs, as they held India back to just 19 off the last four.

Thus was prevented India’s ‘Grand Slam’, a missed chance to hold all three of cricket’s ICC trophies contemporaneously. That MS Dhoni failed to add this ultimate accomplishment to his already extensive gallery of feats could directly be attributed – with due respect to Sri Lanka – to two phases of play.

The second of this, and this can be classified as the minor one, came when Sri Lanka needed 47 from 36 balls, with Thisara Perera and Sangakkara trying to stitch together a union after the relatively rapid dismissals of Jayawardene (24) and the in-form Lahiru Thirimanne (7). Sri Lanka had earlier found themselves on 41/2 at the end of the Powerplay for the loss of openers Kusal Perera (5) and T. Dilshan (18).

For that fateful 15th over, Dhoni called in Mishra with two lefties at the crease. The leg-spinner was taken for 14, including a murderous six over long-on by Perera. Fifteen more came from Mishra’s next, after which the equation of runs-per-ball required stood immensely in favour of the pursuers. Perera ended it in a haste with a few big strikes.

India were set for more when they were sent in to bat after a 40-minute rain delay at the Sher-e-Bangla Stadium. They were 95/2 after 15 overs, with Kohli batting on a 43-ball 50, when Kulasekara was taken for 16 in an over, a casual flick for six, a rasping drive through cover, and a half-timed pull that could have been held at deep midwicket, but went eventually for four, featuring from Kohli’s bat.

With 24 balls remaining, Kohli and India seemed set for a final charge. But the young batsman faced just eight of the last 24 deliveries.

Immediately after the Kula massacre, Yuvraj Singh hogged the strike and labored to rotate it, leave alone getting the big shots in. The southpaw had struck a plain-looking 60 against Australia in the last dead rubber league match. In a game of rather more import and involvement, he looked completely out of place as he scratched out a 21-ball 11.

Neither Malinga, nor Herath nor Senanayake did Yuvraj handle with any conviction. And when he hit a juicy Kulasekara full-toss straight to mid-off it just showed how far gone he was from his peak of a few years ago. After the largess of the 16th over, India could gain only four from three that followed, and just 19 from their last four, as Malinga and Kulasekara gave the batsman very little leeway to free their arms.

It could have been a total even lesser had Malinga caught Kohli at mid-wicket when he had scored 11. But Kohli lived to dazzle through a series of entertaining shots and had five fours and four sixes in his knock. Opener Rohit Sharma (29) was the only other score of note in the Indian innings. The rest – Ajinkya Rahane, Dhoni and Yuvraj faced 36 balls for 18 runs – and that’s that how the cookie crumbled.