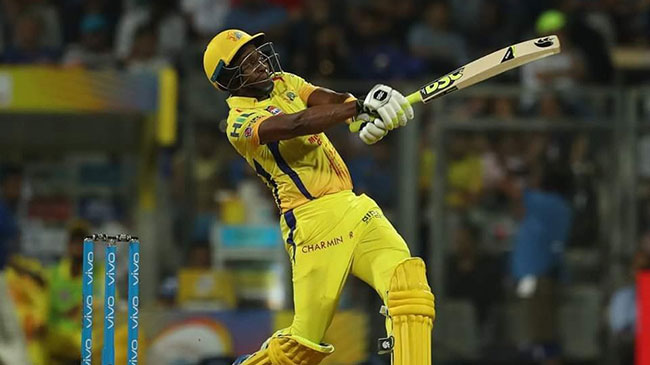 Dwayne Bravo made the most of two dropped catches.

Dropping catch of a world-class player is never a good idea. Not once but Dwayne Bravo (67 off 39 balls, 7x4s, 3x6s) was dropped twice and the West Indies allrounder made Kings XI Punjab pay big time as Chennai Super Kings avenged their IPL 7 Qualifier 2 defeat, taking the Champions League T20 contest by 65 runs to join Kolkata Knight Riders in the final who beat Hobart Hurricanes earlier in the day.

CSK staged an incredible comeback in the second half of their innings to post 182 for 7 at Hyderabad’s Rajiv Gandhi International Stadium. MS Dhoni’s team, which was put in to bat, scored 117 runs in the last 10 overs.

Buoyed by the situation, Pawan Negi, who replaced Mithun Manhas for the game, got rid of George Bailey (6) and Thisara Perera (0) to push KXIP completely out of the contest. It was a matter of time before Bailey’s men were folded for 117 in 18.2 overs. Akshar Patel was the only batsman to have held the fort briefly for 31.

When Parvinder Awana and Perera’s early strikes reduced CSK to 41 for 3 in six overs, things looked really bad for the team from Chennai. With Dwayne Smith (14), Brendon McCullum (6) and Suresh Raina (6) back in the pavilion, it appeared CSK had lost the plot.

With plenty of doubts hovering over the CSK dugout, Bravo joined Faf du Plessis who returned for this match from an injury. Bravo could have been dispatched for 8 when Maxwell, one of the safest hands in the KXIP team, dropped a regulation catch at long-off off Karanveer Singh in the 11th over.

Maxwell missed his chance and Bravo made the most of the opportunity, getting a lot of support from du Plessis who looked in control during his innings of 46 off 33 balls. Both added 65 runs to bail their team out of a gloomy situation before du Plessis was cleaned up by Patel. A ball before the du Plessis dismissal, Patel had dropped Bravo who was on 30 at that time.

Bravo, despite losing Negi (8) and Dhoni (0) as partners to Awana off back-to-back deliveries, kept his cool in the death overs and used his bat to great effect. Patel made up for his previous bungle and removed the West Indian in the 19th over but by that time CSK were on course for a good total.

Ravindra Jadeja also threw his bat around to pick up 27 not out off 13 balls to help CSK reach a very good total. Awana had a great day at the office with 4 for 30 while Patel took 2 for 30.